Sip is located in the public area of Terminal A at the San Antonio Airport near the Delta Ticket counters. We had just started this project when the lockdown hit in March 2020. For most of the construction, the airport was empty, so it made it very easy to get materials in and debris out. They should be opening soon.

Posted in Projects | Comments Off on Sip Brew & Market Project

Residential Project in the Dominion

The former owner of this stunning residence in the Dominion was Greg Popovich, the winningest coach in NBA history and the highest paid. The new homeowners are completely finishing out the interior with new furniture, window coverings and artwork along with a very special touch by Petrus Interiors.

We provided and installed new 2’ x 2’ “Antique Bronze” tin ceiling tiles in the main Kitchen and Breakfast Nook which transformed the otherwise overused and boring sheetrock with spray texture & paint. They love it and so do we!

Posted in Projects | Comments Off on Residential Project in the Dominion

The mansion, now owned by The RK Group, was built in 1951 by Texas representative and senator Virgil Edward “Red” Berry in 1951. The RK Group renovated the original mansion to lease out as an event center as part of a $60 million redevelopment of the Red Berry Estate. “The interior and exterior of the historic mansion has been remodeled from top to bottom,” and includes a new lakeside pavilion sitting by a 12-acre lake with views of the San Antonio skyline. We worked on the interior of the mansion for almost a year, which consisted of all the steel stud framing, ceilings and furr downs. We also framed and sheetrocked the new fire rated elevator shaft that was added. What is not shown on their website are the four Restrooms where we custom-built and installed unlacquered brass and mahogany partitions as seen below. Be sure to follow the link below to get a close up look of the building and property, it’s simply stunning!

The wood has just received stain and hasn’t been lacquered yet, you’ll have to visit the mansion to see the final product but it’s beautiful.

Posted in Projects | Comments Off on Red Berry Mansion Project

An existing coat closet under the stairs was converted into a small wine cellar that holds about 100 bottles. The racks in the cellar were milled out of 1x red oak. Backlighting was installed above the display as well as the racks below it. Rare wine box ends were applied to the walls and ceiling, then stained & sealed. The double doors were custom made and painted to match the Entry door and the wainscot matches the formal Dining Room. The granite top and travertine tile were provided by Gabe with ABC Granite who also did the entire residence. 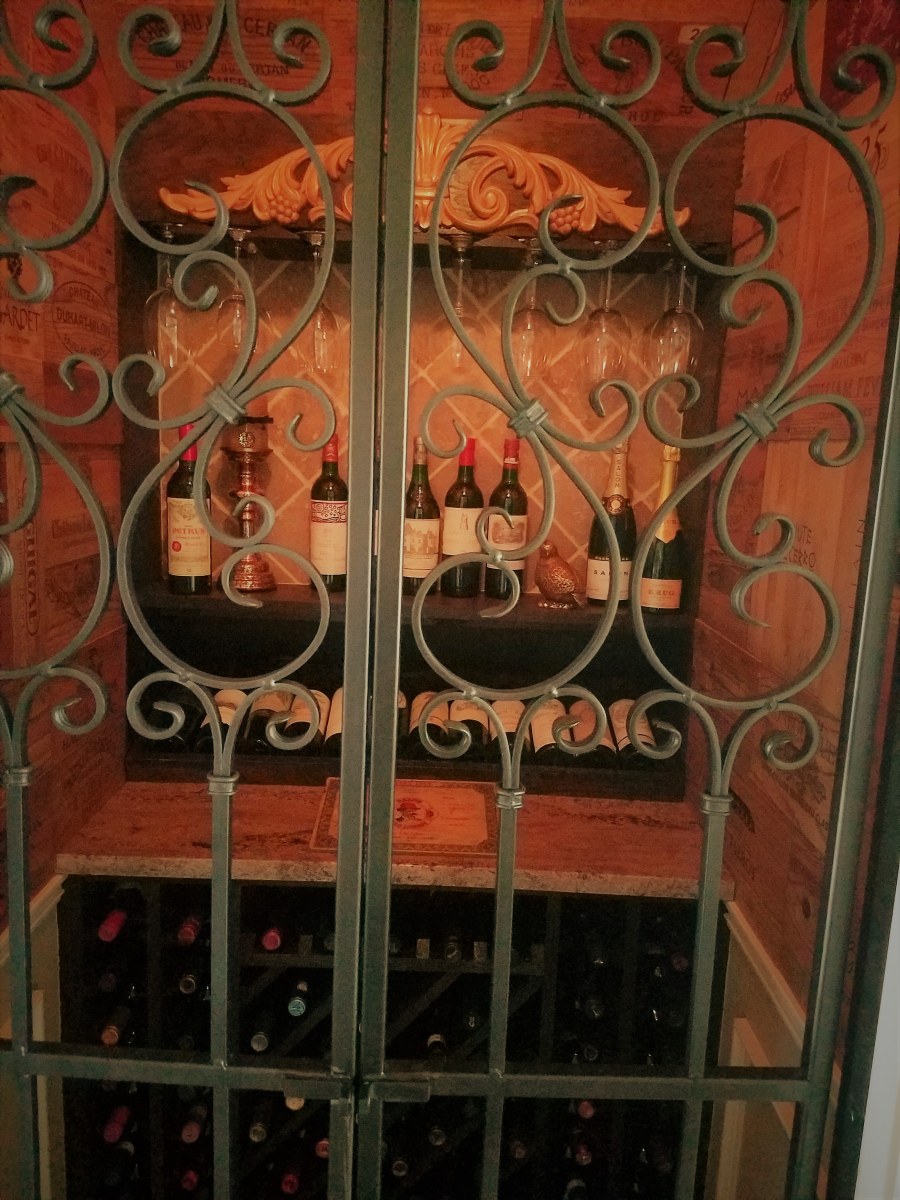 END_OF_DOCUMENT_TOKEN_TO_BE_REPLACED

When you have an open plenum design, acoustics are always a challenge, however if the architect is on his game he has a lot of options to choose from. This project features Armstrong products which lead the industry in aesthetics and performance. The clouds that were suspended throughout the floor are “Axiom Knife Edge” with 2′ x 2′ grid and “Dune” tegular lay in panels.. 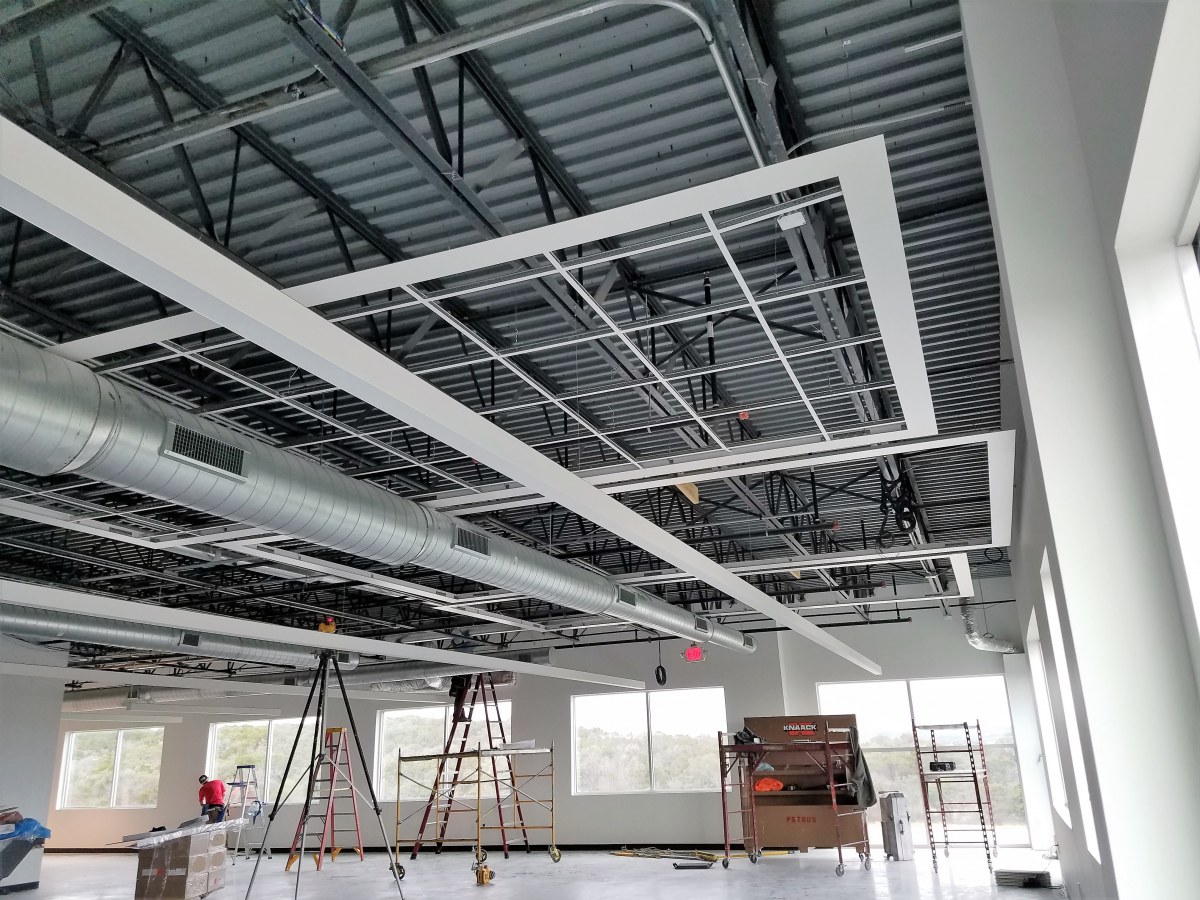 Also utilized was a relatively new product from Armstrong named “Soundscapes” which come in many sizes, shapes, colors & patterns. A grouping of Hexagon shapes were installed in the elevator lobby and some single hung round shapes in the Cafe area. Very striking while at the same time controlling the sound! END_OF_DOCUMENT_TOKEN_TO_BE_REPLACED

Posted in Uncategorized | Comments Off on AMD Phyzdata- Paesano’s Parkway

The Spanish Government is loaning the city a large collection of rare and historical documents that will be on exhibit for about six months. The existing Federal Reserve Building at 126 E. Nueva which was unoccupied was renovated for this exhibit. It should be opening up very soon. Petrus was contracted to install the ADA handicap ramps & handrails on both sides of the building. Fire rated lumber was used. They still have yet to be painted but should be completed this week. 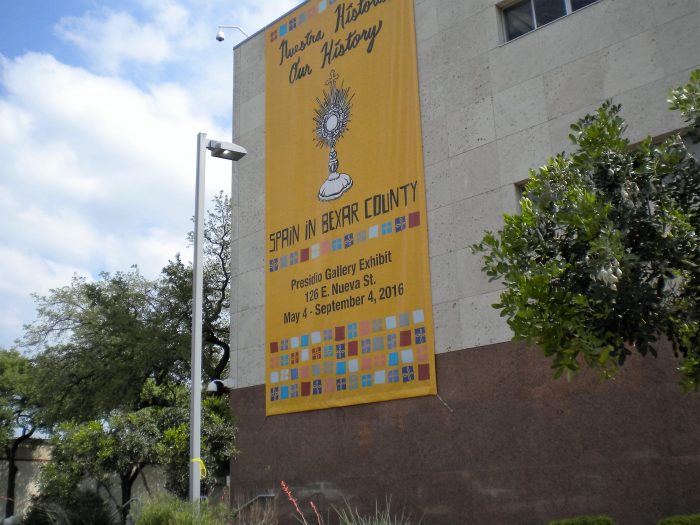 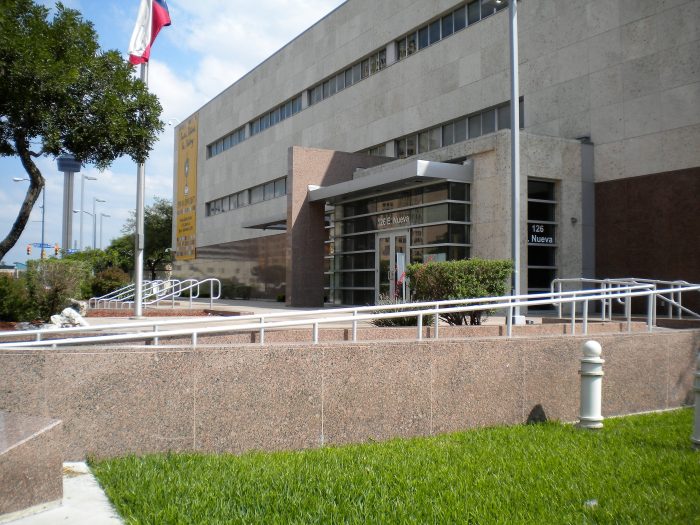 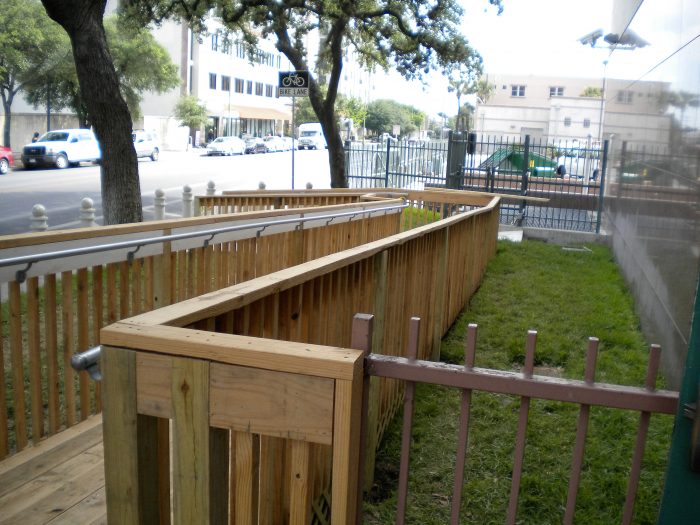 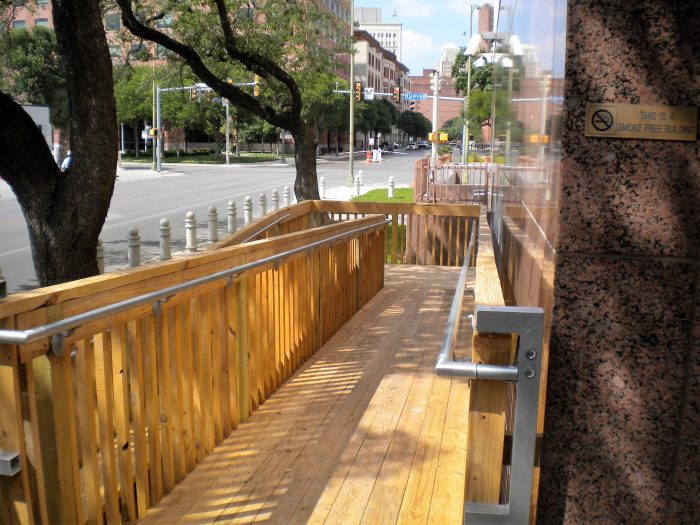 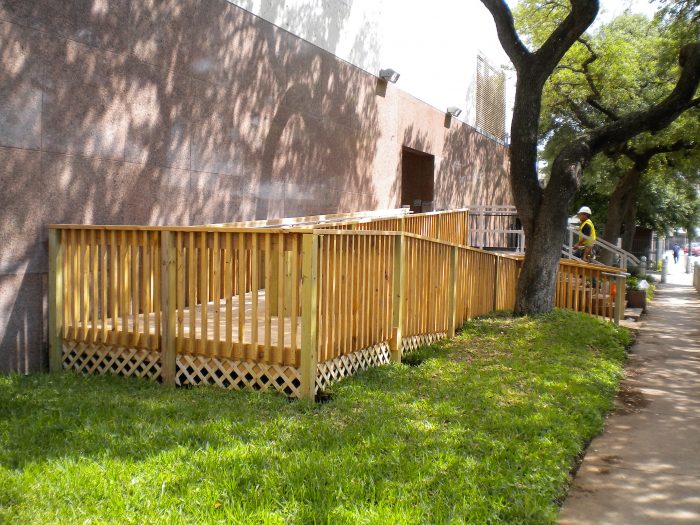 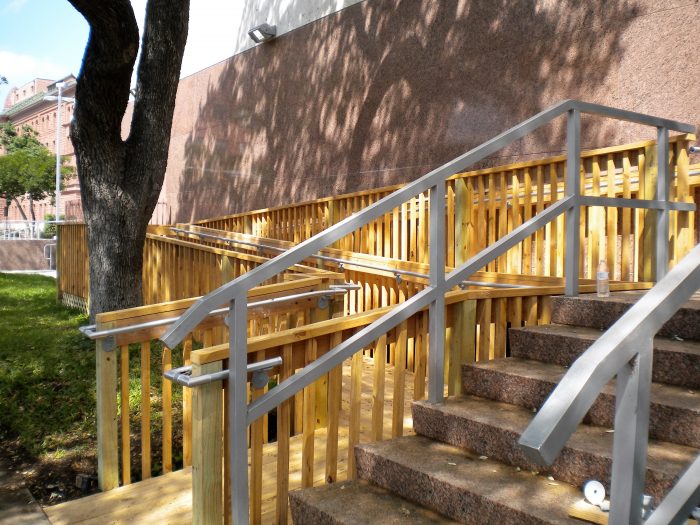 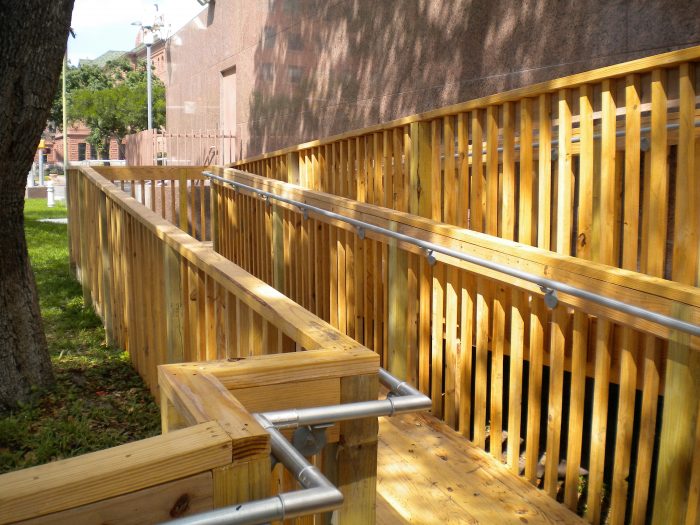 Posted in Uncategorized | Comments Off on Presidio Gallery Exhibit

This project is right off IH 37 South and SE Military Dr. on Goliad Rd. right next to the Lowe’s. We just recently completed the suspended acoustical ceilings throughout the building and have started the most challenging part of the project, an aluminum soffit at the Porte Cochere. The challenge lies in the fact that the material from Hunter Douglas is designed for a flat ceiling and as you see it’s nothing but flat. Normally you would just screw the receiver channel right to the curved structure but since the City’s fire codes required the canopy to have a sprinkler system we had to furr down an additional 8″ with 2-1/2″ steel studs in order to get below the cast iron pipes. The edges were trimmed out with a matching break metal. Pretty cool stuff! 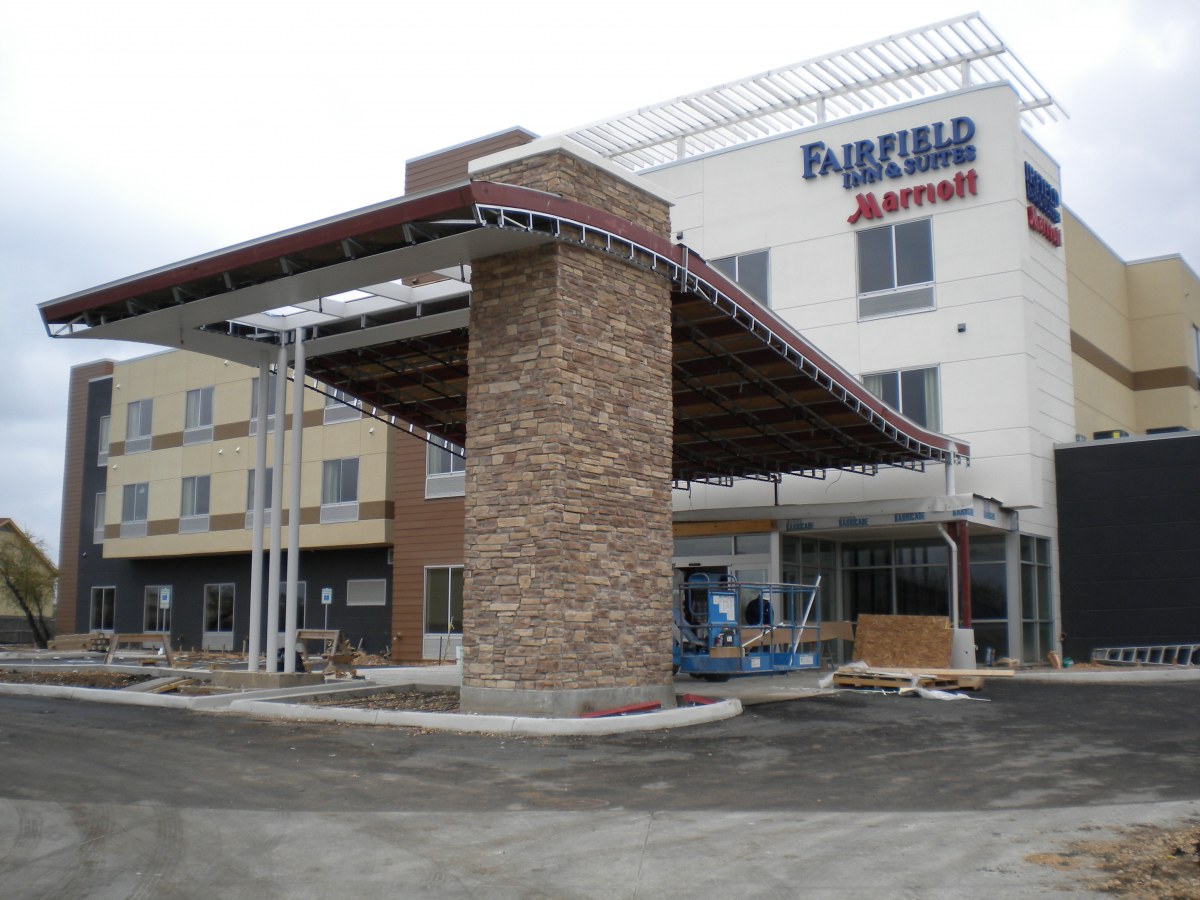 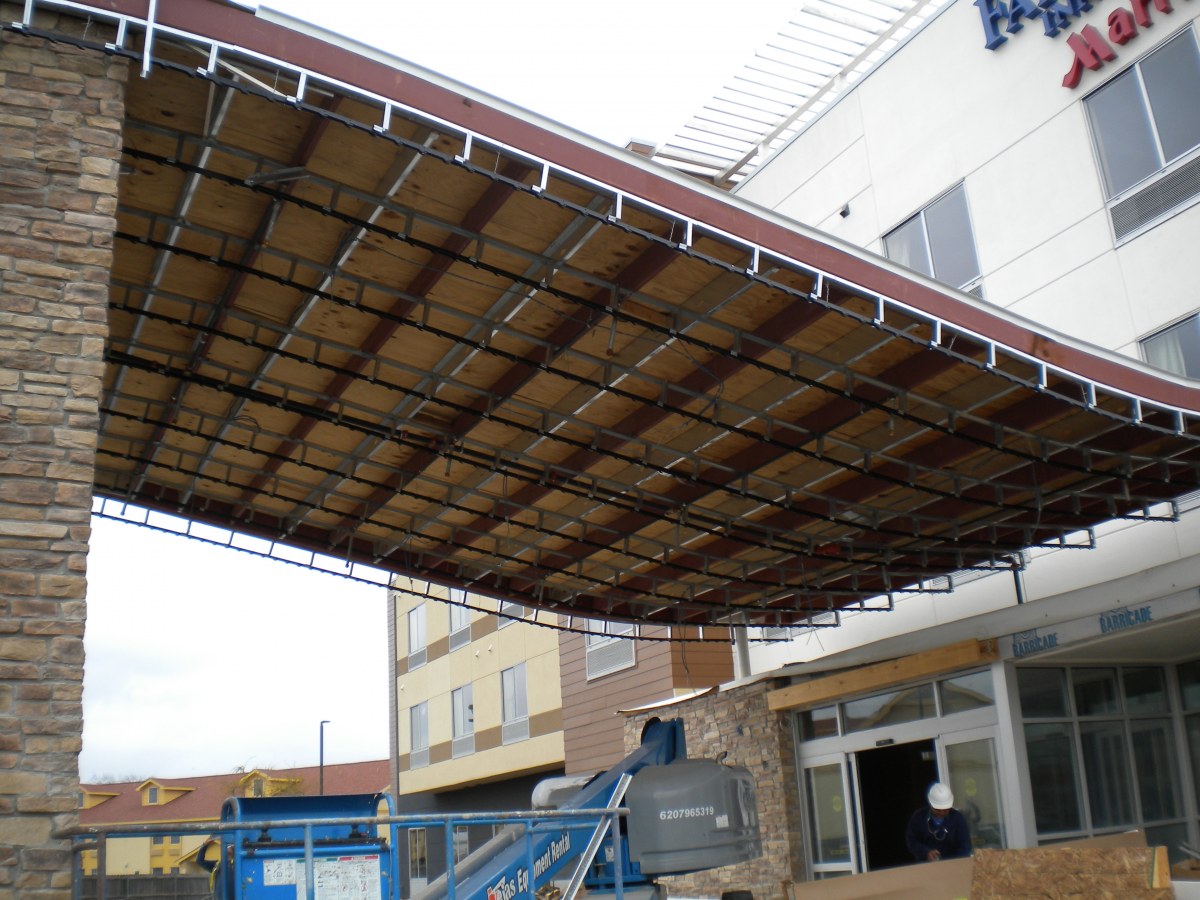 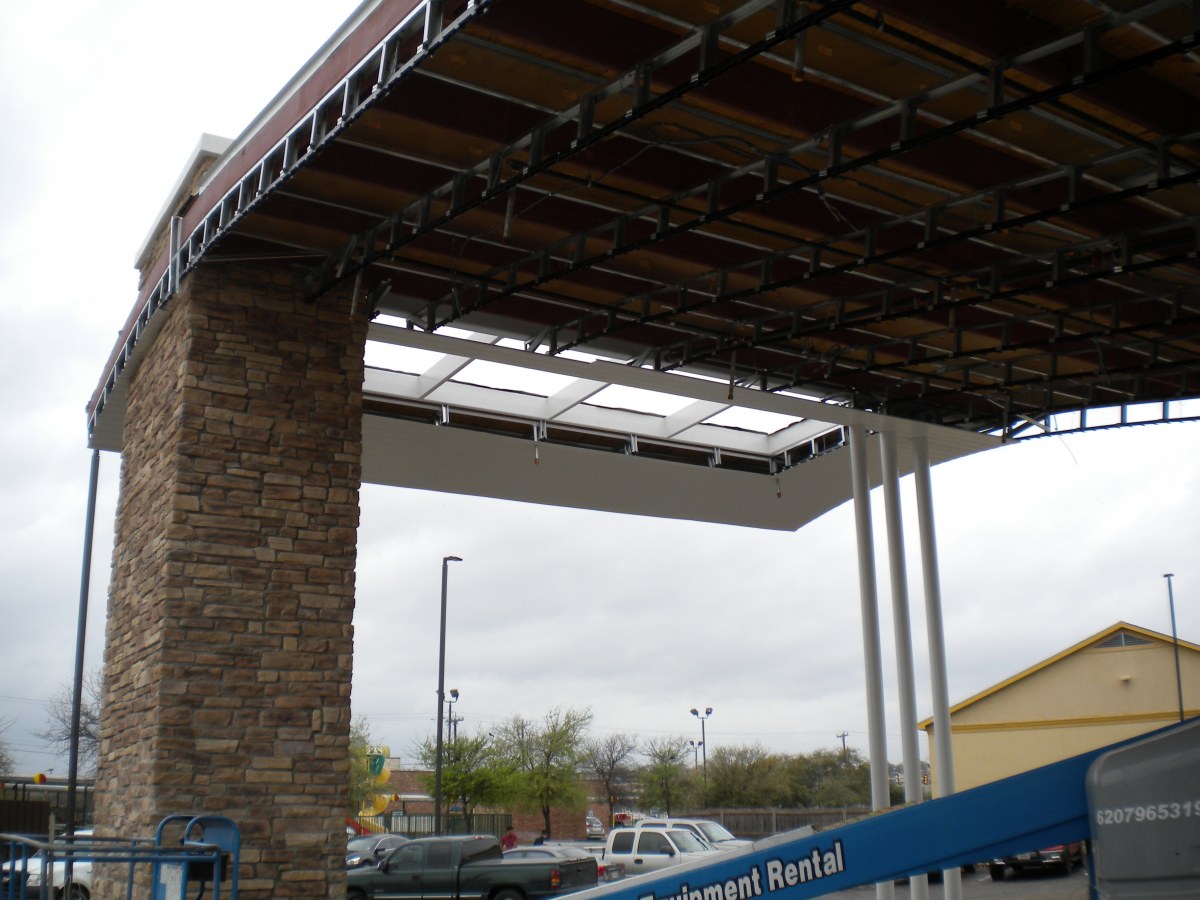 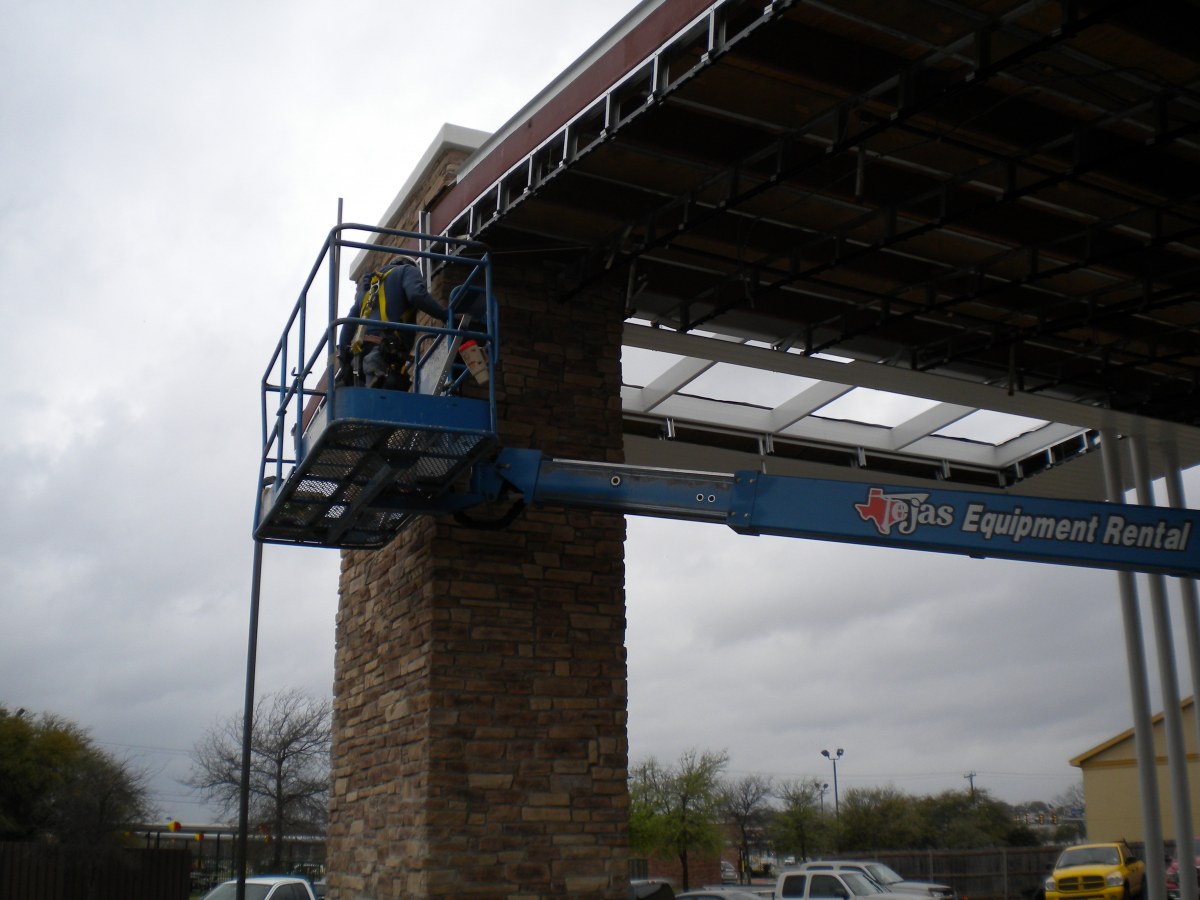 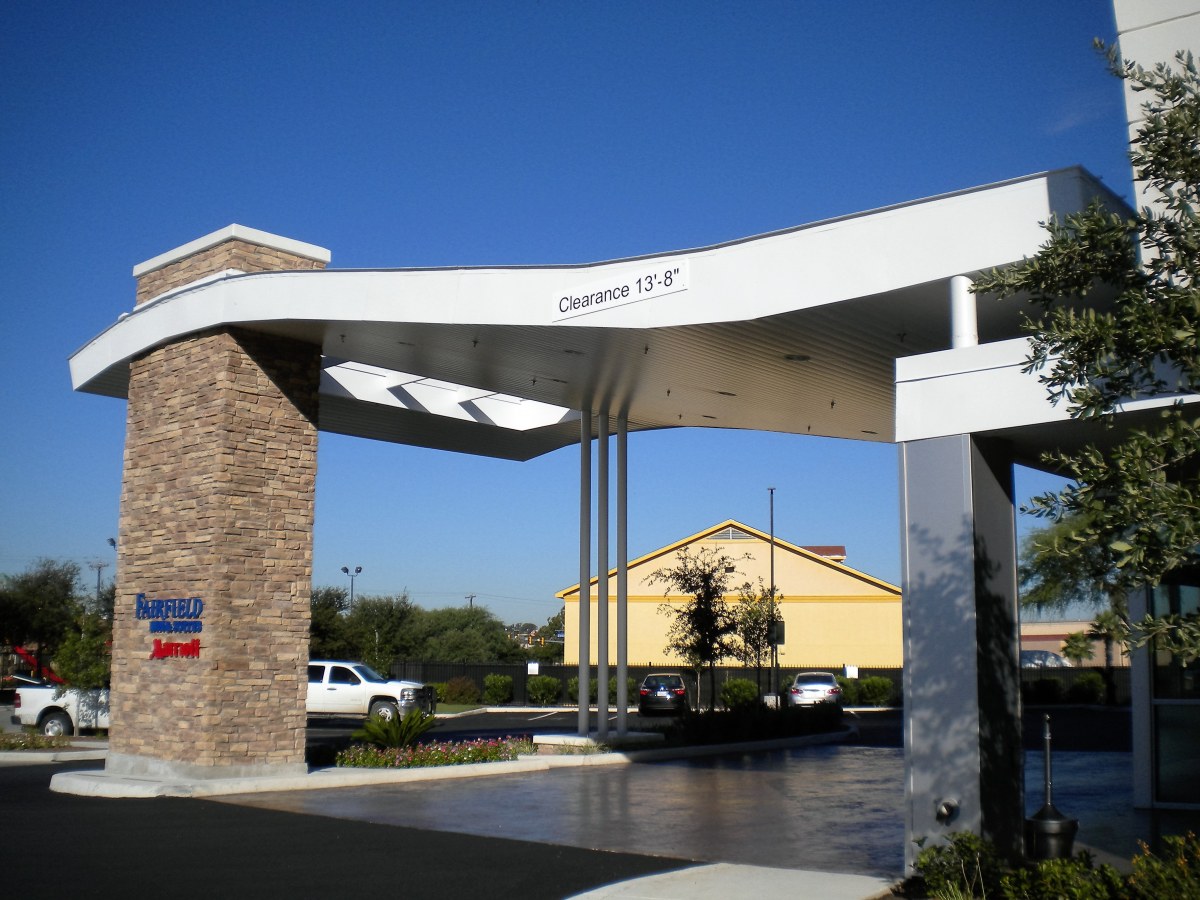 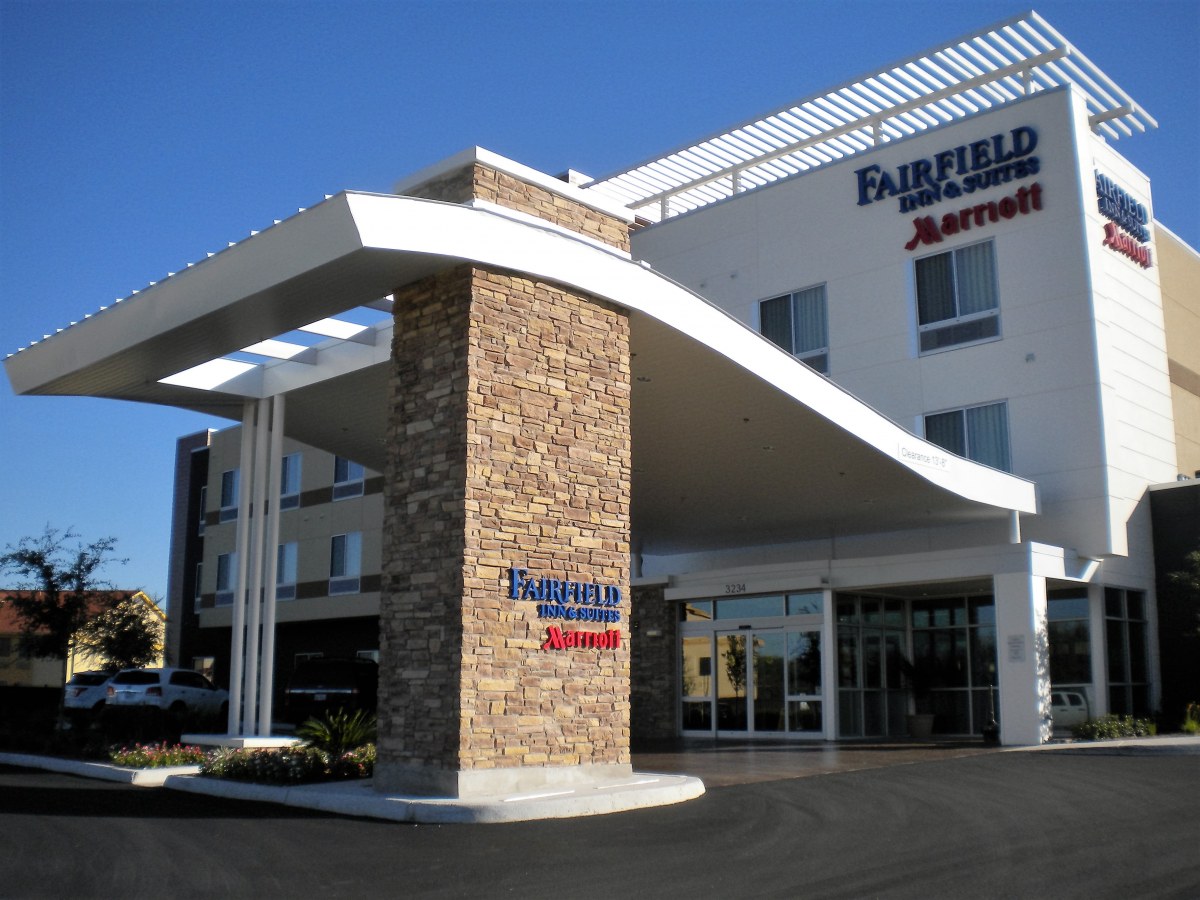 Posted in Uncategorized | Comments Off on Fairfield Inn

This new restaurant is at the corner of Broadway & Josephine and was the final space to be finished out at the Mosaic building. The food is great & the service is excellent. We were contracted to mill, configure & install the unusual wood trim that decorates the exterior walls & Entry ceiling. Enjoy! 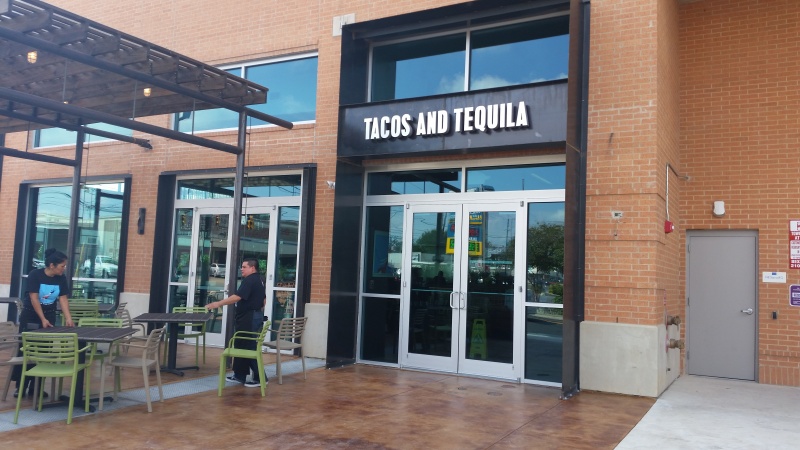 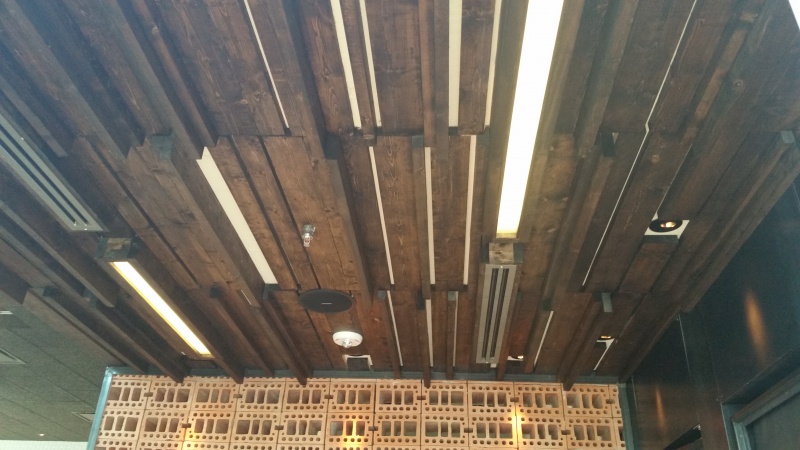 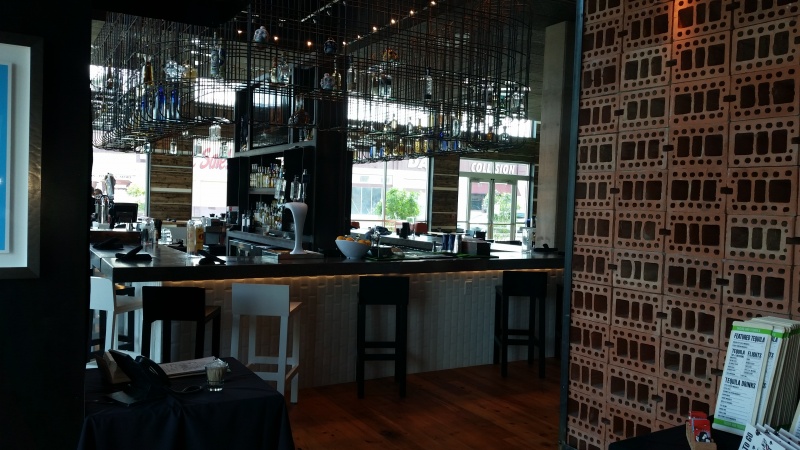 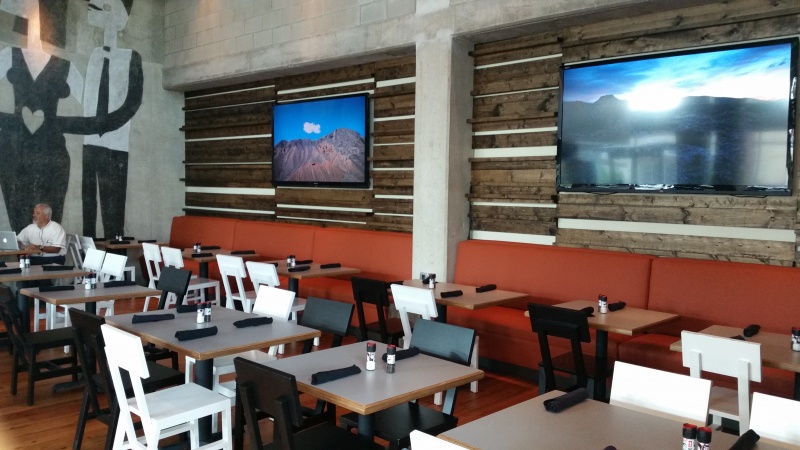 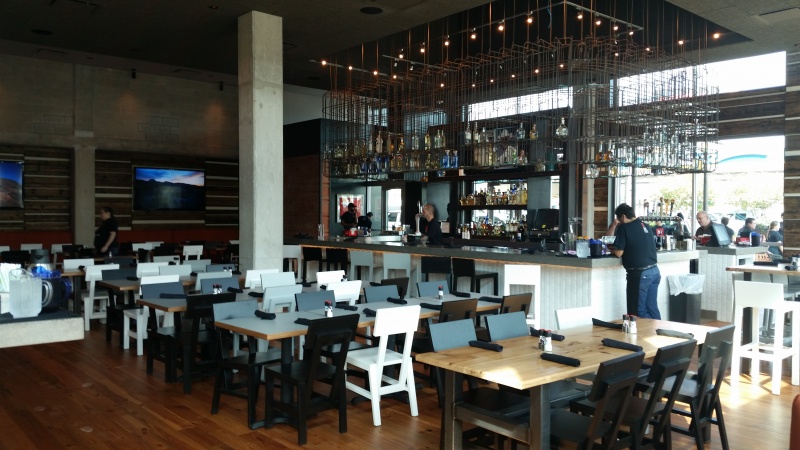 Posted in Uncategorized | Comments Off on Tacos & Tequila

Tri-County Crossing Phase I & II consist of over 4 acres & 57,000 sq.ft. of retail, office, & medical space. The unusual “Pyramid” style stucco facades were framed out of 6″- 16ga. steel studs. The awnings over the sidewalk have a concealed gutter behind a furr down and the downspout is also concealed in the round columns. The entire shell of the building and the majority of the Tenant Finish Out was constructed by Petrus and completed over a 4 year period. 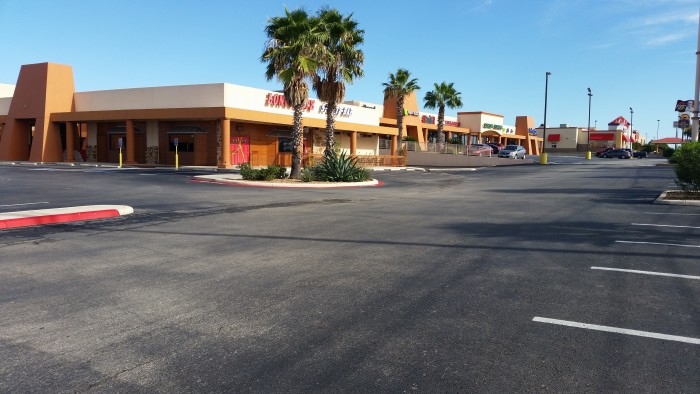 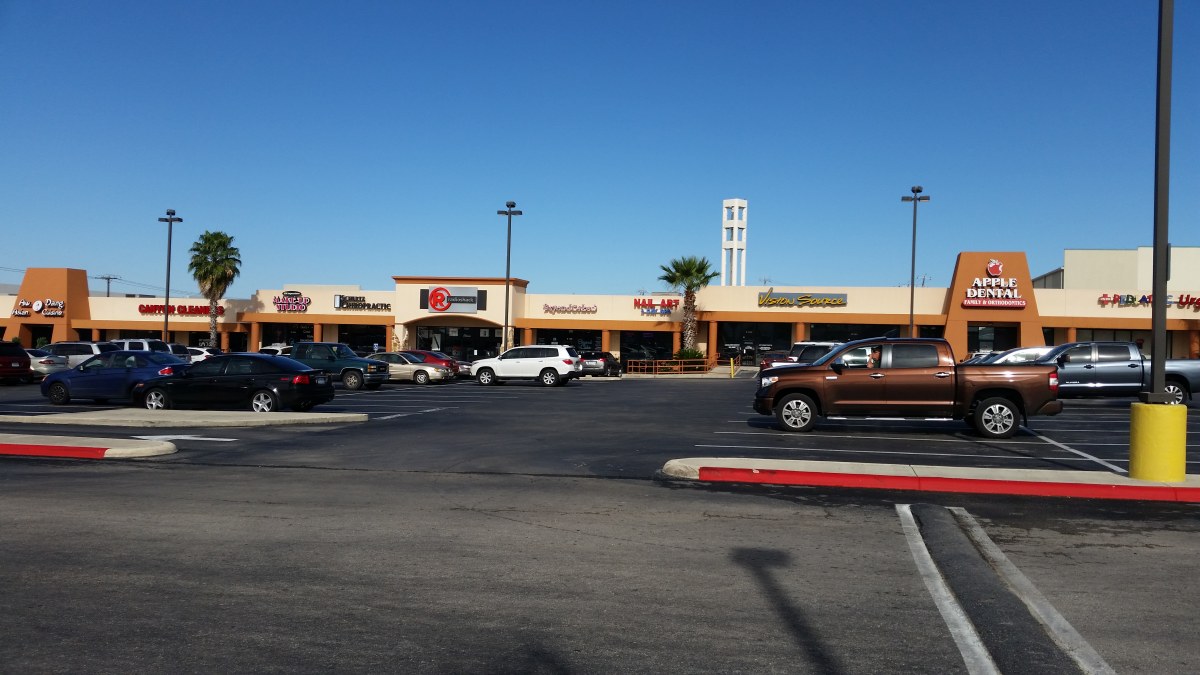 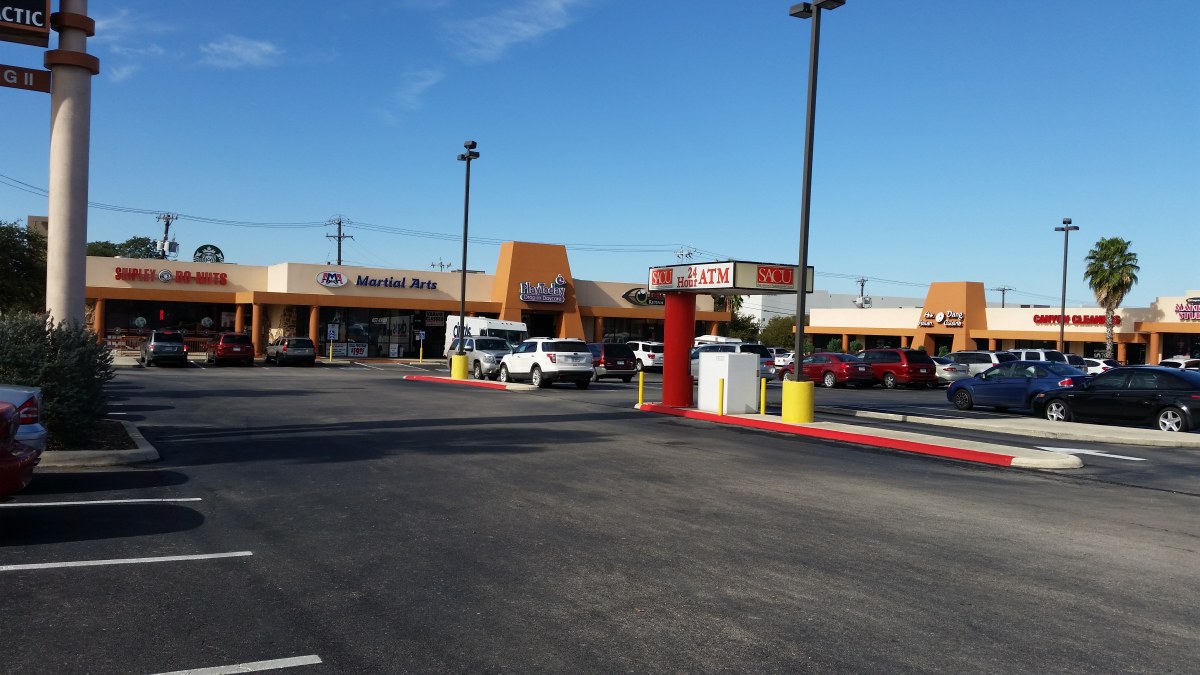 Posted in Uncategorized | Comments Off on Tri- County Crossing

If you drive down Military Dr. on the south side you will pass hundreds of buildings that pretty much all look the same, bad. The owners at Veritas wanted to make a statement and did by adding these stunning EIFS stucco facades on the roof. All the work was steel stud framing except for the centerpiece, the dome, which was constructed out of wood with an EIFS stucco finish. Skip Martin of Keys Construction was the GC and had an awesome team that put this one together. 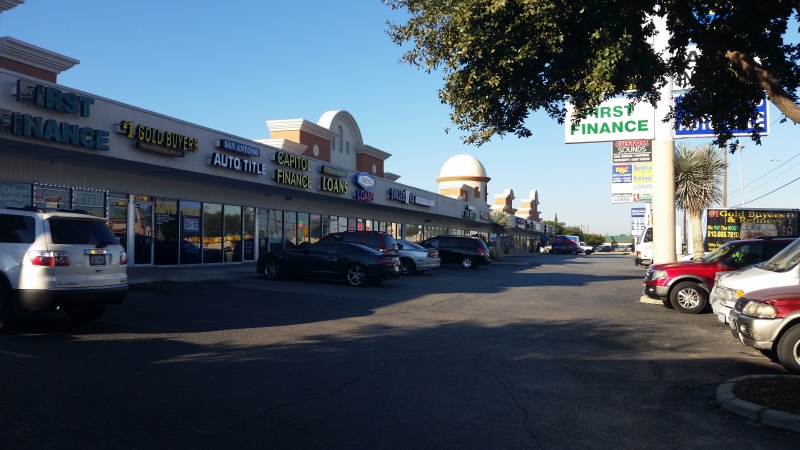 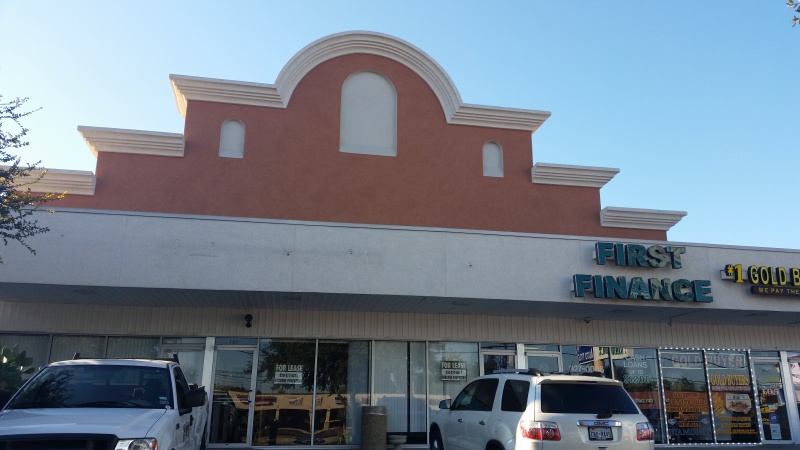 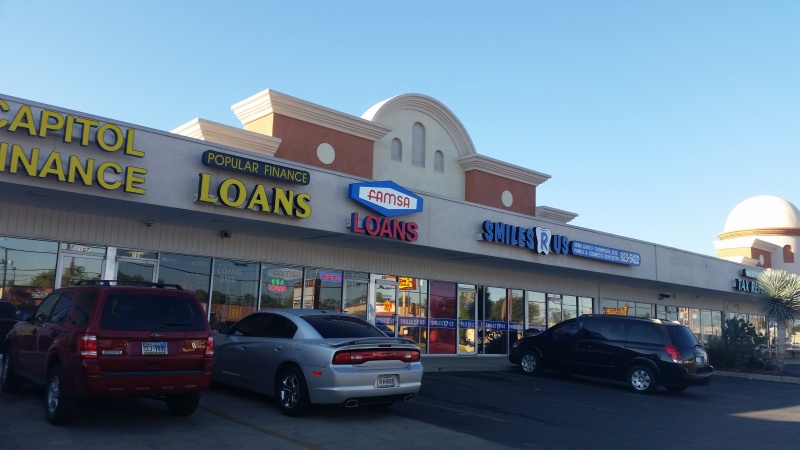 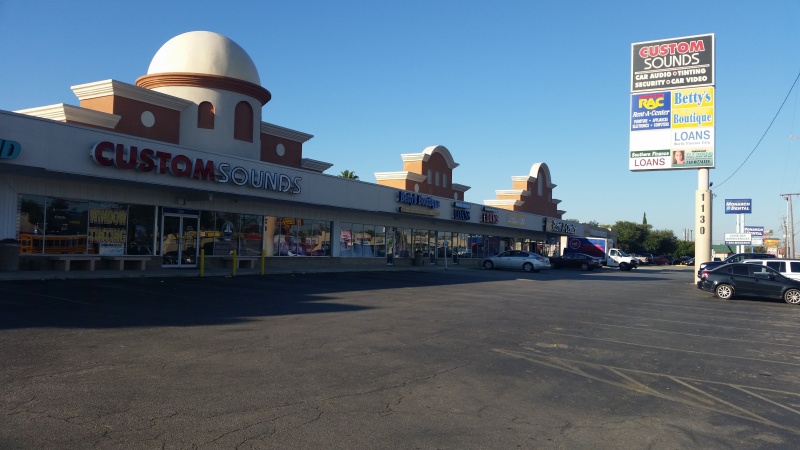 Posted in Uncategorized | Comments Off on Veritas Properties

Call Now to Get Started!